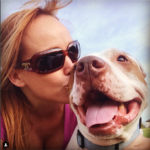 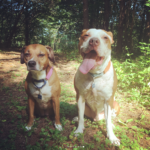 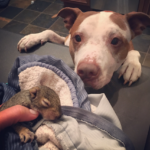 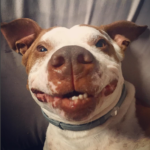 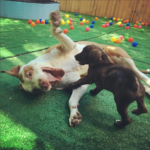 It took years before Mr. Bones finally found his way home. In the early morning hours of July 2, 2012, I found myself on the NYC Animal Care & Control’s Urgent List and there he was – a ragged dog with an enormous open mouthed smile. I was unaware of the exponential number of animals euthanized at our city shelter each year and the more I educated myself, the more a sense of responsibility to act consumed me. A few hours later, just before his scheduled euthanasia, Mr. Bones found himself in the backseat of my car, en route from the Brooklyn shelter to my home in Manhattan.

At an estimated 6 years old, he was severely malnourished, covered in scars, healed wounds and possible cigarette burns. His tail was a battered twig of fur, blood and bone and his mouth held a level of dental trauma so severe our specialists cringed. Over the next six weeks Mr. Bones was treated for a life threatening case of canine influenza, his tail healed without an amputation and he underwent two oral surgeries to remove nine teeth that had shattered so severely only the pulp remained. (A year later, he would undergo a third surgery to remove another five.) Mr. Bones made a full recovery, but this was just the beginning of his story.

Our road was not easy and we stumbled many times. Mr. Bones never passed his AKC Good Citizen test because he couldn’t hold still while a stranger handled him, unsure where the touch would lead. He needed gentle, slow introductions to most men and his anxiety here only escalated as the years went on. He always welcomed children gently and with great respect, a beautiful, shinning part of his soul. He could never be immersed off leash with strange dogs in a park, but he was beyond gentle with puppies, fostering more than 65 of them during his time in my home. He shared his bed and toys, ‘mothered’ them and set so many up for success with milestones he never had the opportunity to receive. Mr. Bones was beyond resilient, loving my first dog, Charlotte, like he grew up with her.

On April 6, 2018, after six years of trying to fully rehabilitate him, I made the bravest decision of my life and humanely euthanized my beautiful boy, whose reactivity to men and strangers, and anxiety and fear, had begun to dramatically worsen. (Click HERE for his eulogy.) The life he led before me is a mystery, but it wasn’t kind. There were pieces to his puzzle that surfaced during my efforts to rehabilitate him that enrage me. Years of trauma created PTSD I worked hard to manage, maneuvering my life to limit his episodes, calm his stress and lighten his anxiety. He worked even harder to overcome his past, clearing so many mountains he inspired me to create this organization in his honor. He was the most emotionally aware, sensitive dog I’ve ever worked with. Over the years I have stopped imagining what I would say, or do, if I ever met the person(s) who had him before I did. His ability to forgive and not look back astounded me and it is in his honor that I have let go of my anger and move forward with my mission.

The plight of Mr. Bones ignited a call to action within me so profound I was compelled to do something, to create this animal welfare nonprofit. React, speak up and get involved.

What will your something be?